Even the most creative among us experience a block from time to time — though I used to think I was alone in this. Now, I know that while I may find myself staring at a blank computer screen, wondering if I’ll ever have another good idea again, there are things I can do to break free. I’ve learned to turn to these four creative block breakers — and for me, they’ve proven effective time and time again.

Quick Read:Blocks are an annoying, but common, part of the creative process. Getting creatively stuck used to be my nemesis, but I learned that this (miserable) state can be remedied through the application of these types of strategies, which I will share with you. With little effort, in fact, the less effort the better, you too can get back to making art in no time!

Get Unstuck From a Creative Block

Sometimes when I’m stuck, it’s because I’ve been staring at the problem for far too long. Pushing against a brick wall won’t make it move, and it can beat you up in the process. So step away. Take a walk. Let your mind return to the state of flow by letting it wander. Laying in my hammock and letting my mind wander is the number one way I get out of blocks.

But just so you know, stepping away isn’t about procrastination, it’s the chance to get into a new environment, to take a few deep breaths and see what ideas come to you while you’re away. Procrastinating can make everything worse as the pressure builds up and blocks creativity. So step away but get the have-to stuff done, first. Science backs this idea up, too. Research published by the British Journal of Sports Medicine found that physical movement increases creativity. So get walking.

The pressure to produce good work is intense sometimes. And when I’m being a perfectionist, demanding more of myself than my art wants to give in that moment, I can create a backflow of pressure, blocking my artistic impulse. In the midst of that (even self-created) dry spell, giving myself permission to create without expectation can be enough to help me produce amazing results.

For writers, this could look like a brain dump, writing for ten or 15 minutes about whatever random stuff is going on inside your mind. Visual artists can grab a canvas and get messy. For dancers and musicians, this is a chance to just enjoy music without worrying about how you’ll perform. We’ve got to get out of our own way to let creativity flow.

I know, I know, talking to yourself is typically seen as strange behavior, but there is actually evidence that this practice can improve the way we think. Talking to ourselves can help us be more creative and help us to gain a new perspective on the work just by looking through the lens of imaginary us taking another look.

If you’ve been silently working at a project with no success, consider expressing the details of the work aloud until new ideas begin to come to you.

Feel Your Way Into It

As it turns out, experiencing emotions is a big part of what makes creative people more creative. Although both negative and positive emotions seem to be a part of the equation, what matters is the intensity of the emotion being experienced.

So, if you’ve been feeling frustrated or just downright blah about the work in front of you, try doing something seriously fun to bring intensely positive emotions into the mix. Catch up on some comedy specials to laugh until you cry or go out with friends. Either way, really feel whatever you’re feeling. Let yourself experience your emotions. I think sometimes my blocks are caused by cutting myself off from emotions I don’t want to feel.

Sometimes it feels like my mind is in a rut, or maybe I’m bored. To get free of a creative block, sometimes I turn to a skill I’ve never attempted before in order to dig up new excitement and find a way forward. Probably this is related to that feeling thing again. Like an infatuation, but with skills or new materials.

Why does this work? The belief is that a lot of what makes people creative is their ability to make connections between seemingly unrelated ideas. A new challenge or fresh piece of information can ignite a brand new connection, probably forging new brain pathways or the like, and boom you’ve got yourself a new idea or inspiration that leads you forward again.

Inspiration isn’t as dependent on whims as some would have us believe. We don’t have to be victims of a fickle muse. With persistence and strategic approaches to encouraging creative thinking, we can get back to doing that which really gives us life.

How to Make Your Education Really Count 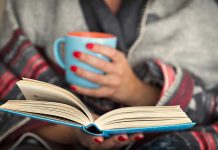 5 Places To Get FREE Books